The tradition of sacred art in Greece can be traced back to antiquity, where statues were believed to house the spirits of deities, and the smallest of images in the form of talismans and amulets allowed the bearer to carry their gods with them on their travels. The metaphysical philosophy underpinning the idea of living images was explored by some of the greatest neoplatonist philosophers and following the adoption of Christianity in Greece, evolved into the iconographic tradition. The depiction of saints and holy figures in the Greek Orthodox Church traces a direct historical lineage to ancient art, and includes a detailed philosophy which does not differ much from its pre-Christian roots: the icons are considered to be living images, not idols, while every detail hides rich layers of symbolism designed to bring the viewer in closer contact with the divine â€“ so much so that it is said that icons are not painted, but â€œwritten,â€ as their symbolic elements are seen as a form of language.

While in the last few centuries the form of icon design has become largely canonised, and today most icons are traced to create precise replicas of older, more â€œauthenticâ€ images, in fact there is no such prescription, and in centuries past many different movements marked the evolution of iconography through the early Byzantine, neo-Byzantine, italo-Byzantine, Cretan and Septinsular phases, to name but a few. Due to her unique geography, Corfu and her churches are a unique repository of the Septinsular style of iconography, a fusion of traditional Eastern technique with Renaissance and Mannerist styles. It is easily recognised by the more rounded figures, the use of perspective, and aspects of realism in the fabrics and architectural features.

This richly illustrated series of seminars and workshops, delivered by Dr. Sasha Chaitow, an artist and art historian, takes you on a unique journey through the symbolism and history of the iconographic tradition, and includes practical workshops where you can learn the basics of icon creation and produce your very own icons. 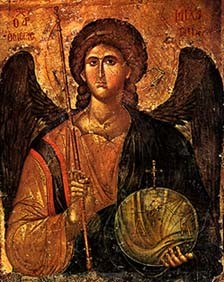 In this introductory session, Sasha will introduce you to the Greek iconographic tradition in a presentation that also explains the unique place that icons hold in Greek society and culture. This session incorporates a broad historical overview of the evolution of Greek sacred art from the pre-Christian era.

In this session Sasha explains the concept of â€œliving icons,â€ the underlying philosophy, and how these sacred items are seen to embody the figures they represent.

It is traditionally said that icons are “written” rather than painted â€“ in this session Sasha explores this idea and provides explanations of some of the most common “symbols” and stories attached to the iconographic tradition.

This session is dedicated to the evolution of iconography and its various styles, told through its images.

This session introduces the traditional iconographic technique, and comprises the first of two practical sessions in which participants learn the basics of icon drawing.

In this session Sasha discusses and demonstrates ways for iconographic techniques and symbolism to be incorporated into any artistâ€™s creative practice.

* Other dates on request. Sometimes if there are several requests we will set an additional workshop. We will inform you regarding that if you leave us your email address.

Our package of holidays includes richly illustrated series of seminars and workshops, delivered by Dr. Sasha Chaitow and...

CNN makes a special tribute to the alternative tourism of Greece, that over the last few years, seems to be blossoming. ...

A Nice Documentary About Corfu

MEMBER OF THE HELLENIC TRAVEL ASSOCIATION